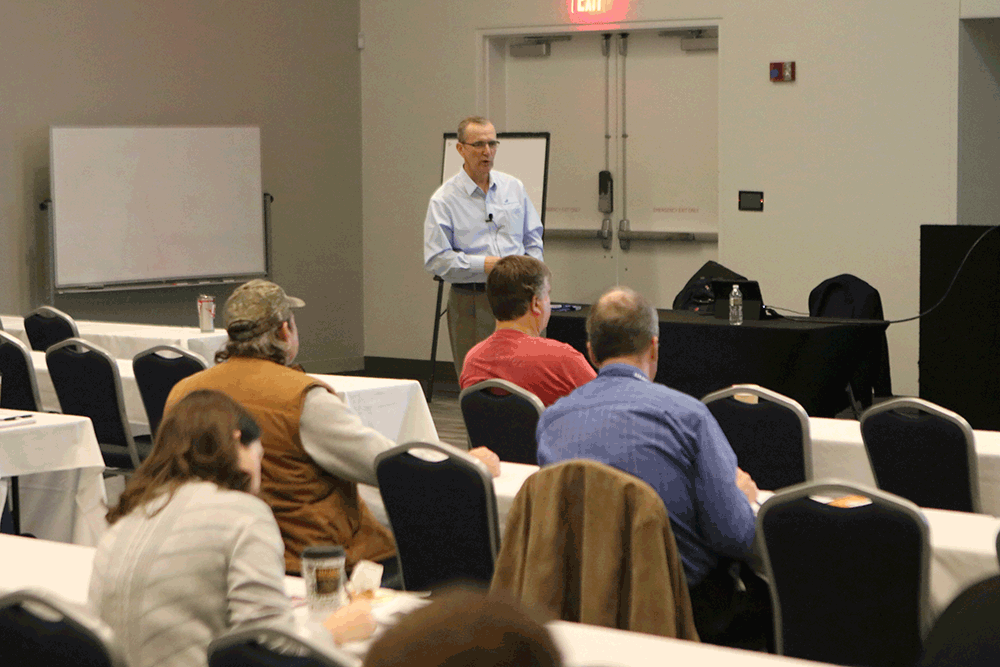 Industry Influencers is a new series for Precast Inc. magazine in which we talk with people who are looked to for guidance and advice by NPCA members across generations.

For this article, NPCA caught up with G. Terry Harris Sr., director of technical services with GCP Applied Technologies. Harris, a frequent presenter for NPCA education courses, serves on the American Concrete Institute Board of Directors and is an active participant in NPCA, ASTM International, NRMCA, ACPA and the RMC Foundation Advisory Council.

Q: How did you first get involved in the precast concrete industry? A: I went to school on a concrete association scholarship to learn about concrete technology. In 1979, my first job was working in a precast/prestress yard down in Fort Myers, Fla. I worked there that summer before I went off to school. My job was to do whatever anyone else told me to do. And so I made cylinders. I had no idea what I was doing. I carried tools, I shoveled concrete and raked concrete. And that was before superplasticizers, so we were doing the heavy lifting with that 3- and 4-inch slump concrete. Then I went off to school. After school, I went to work for a company that had both ready mix and precast pipe. We also did big box units for underground drainage. I did that for a while.

I moved back into just ready mix for next few years with two different companies. And then in 1997, I started working with WR Grace, which is now GCP applied Technologies, and did sales for a little while, then moved back to the technical side. When I moved back to the technical side, I found that a lot of the precasters that were my customers could really use some help in coming up with mixes and processes to place the concrete. We were just getting into self-consolidating concrete. Nobody knew how to do it, so I spent a great deal of time working on self-consolidating concrete and exploding a lot of myths about what it was and what it wasn’t. I believed those myths initially, too. It was supposed to be a super smooth finish, bug hole-free, like glass – all those things, none of which are true.

I became involved with NPCA, and I’ve done a lot of public speaking. Now, I have a team of seven people, and we work not just with precasters, of course, but ready-mix folks. My team is still doing the helping with mixes, helping with processes to make the process go smoother, solving problems when they come up.

Q: What prompted you to go into the industry or pointed you in that direction?

A: I’ve always been involved in construction. My dad was in construction, and I was going to do something in construction, because that’s what I knew. And frankly, when this opportunity came up, my first thought was, “Why would anyone need to go to school to learn about concrete? Concrete comes out of a truck. You place it, piece of cake.” I had no idea it was as complicated a material as it is. And as I started reading about it, I thought, “This is like a big puzzle.” And I’ve always loved puzzles since as long as I can remember. It just seemed like something that would be right up my alley, and it’s been a lot of fun. There’s always something unique and interesting to try to solve or understand because it never happens exactly the way you think it’s going to happen with concrete.

Q: What are some of the most common issues or problems that precasters come to you with now?

A: You have all the old standbys – you have the bug hole issue or the finish issue. Sometimes it’s not bug holes. Sometimes it’s sand streaking. But a lot of times it’s a formed finish issue. And then it’s the mix that isn’t performing, and that might be strength, it might be workability, it might be I can’t control the air. And a lot of times it’s been working and now it isn’t. So something has obviously changed because the performance has changed, but it’s not apparent what has changed. And we deal with a really complex combination of materials that one small change can sometimes throw the whole system out of whack.

Q: Is there a particular problem or issue that really piques your interest?

A: That’s going to be the problem that I get the call and it’s, “Hey, I’ve talked to this person. I’ve talked to that person. We’ve tried 20 different things. And nobody can figure it out.” So no matter what the issue is, when I hear that nobody could figure it out, then obviously it’s a bit of a challenge. And that’s what really interests me. A lot of times it doesn’t get to me, unless that is the case. One of my guys has usually dealt with it or somebody in the precast plants dealt with it. But when no one can figure it out and I hear those things, then it becomes really interesting to me at that point.

Q: How have you seen things change during your 43 years in the industry?

A: Concrete as a material has changed. We’ve gone from 3- and 4-inch slump concrete to 25- to 30-inch slump flows. We have seen a huge change in the admixtures that we use. Superplasticizers were a bit of a convenience that you didn’t kind of have to have. But now if you want to do SCC, you have to have a superplasticizer, and polycarboxylate superplasticizer have really changed the way we place concrete in a precast plant. In some cases, I think they’ve changed the shape, the intricacy of the pieces that we can make now because we can get that concrete so fluid.

There’s been a lot of change in automation. The first plant that I visited was all manual. There was no computer in sight. So we’ve gone to computerized batching. We’ve got moisture controls that we didn’t have. The only moisture control when I started in the industry was someone with a hot plate and a pan, and they would check the moisture. If we were fortunate, they would check it once in the morning and assume that it didn’t change all day. That’s a little bit facetious, but it’s pretty close to accurate.

The forms have changed. The types of structures we make have changed. We do different types of wall panels that pretty much didn’t exist (40 years ago). The architectural precast is way different than what we’ve seen in the past. And we continue to see things like BIM where we’re modeling everything. We have the virtual reality where you can walk around in a precast parking garage before it’s ever built. You have the laser devices where it’s projecting the layout onto the form so that we don’t need plans anymore. I think the automation of the industry is probably the biggest change. That and self-consolidating concrete are probably the two biggest things that I’ve seen change.

Q: How do you see it changing going forward?

Q: You’re a frequent speaker in NPCA education courses. Why is education important for the industry?

A: Well, first of all, I enjoy presenting I enjoy talking about concrete. I enjoy talking in general.
I think that there’s a lot of us older guys out there, and I think it’s really an obligation. And I don’t want to sound real pious here, but I think it’s an obligation to pass the knowledge, the experience as much as we can on to others. I can’t imagine why we would want the younger folks in the industry to struggle to find things out when we have the ability to help train and inform the industry. It makes the industry stronger for the next generation coming through, and it gives people that are willing to learn opportunities to expand their careers. If people don’t want to learn, they’re comfortable staying exactly where they are, then OK, that’s fine. But if you really want to advance in your career, the learning is a part of that. I think it’s an obligation, and I enjoy it.

Q: After 43 years in the industry, what’s in your future?

A: I have a theory that once you stay in the concrete industry – and it doesn’t matter if it’s precast, ready mix or material supplier – whatever it is, once you’re in it seven years, you can’t get out. You’re locked in. You’re not going anywhere else. You might think you are. You might leave for a short time, but you’re coming back. That’s just my own personal theory. Kind of like a seven-year itch, I guess, or a seven-year curse, depending on how you look at it.

I am excited about the changes in the industry and all the new things that are happening, and we’re still developing new products here. I think we’ve seen an acceleration and the adoption of some new things like the PLC, the 1-L cement. That’s just kind of happening like overnight, even though it’s been in Europe for a long time. We saw the SCC adoption in precast much, much faster than ready mix, and ready mix is a small portion of the production. But in precast it’s almost all of it.

So I’m excited about things that are changing. I’m excited that with my team at GCP, a really strong team. And I’m planning to keep doing what I’m doing for the foreseeable future. I don’t have any retirement plans at this point. It’s hard to imagine me retired. I would probably drive everyone that knows me crazy. So I’m gonna keep doing what I’m doing. And I’m gonna keep talking a lot about concrete. And when I get the opportunity with NPCA or any other groups that want to have me in and talk, I’m gonna take advantage of it and hopefully people get something out of it. PI

Heather Bremer is the communications manager at NPCA.