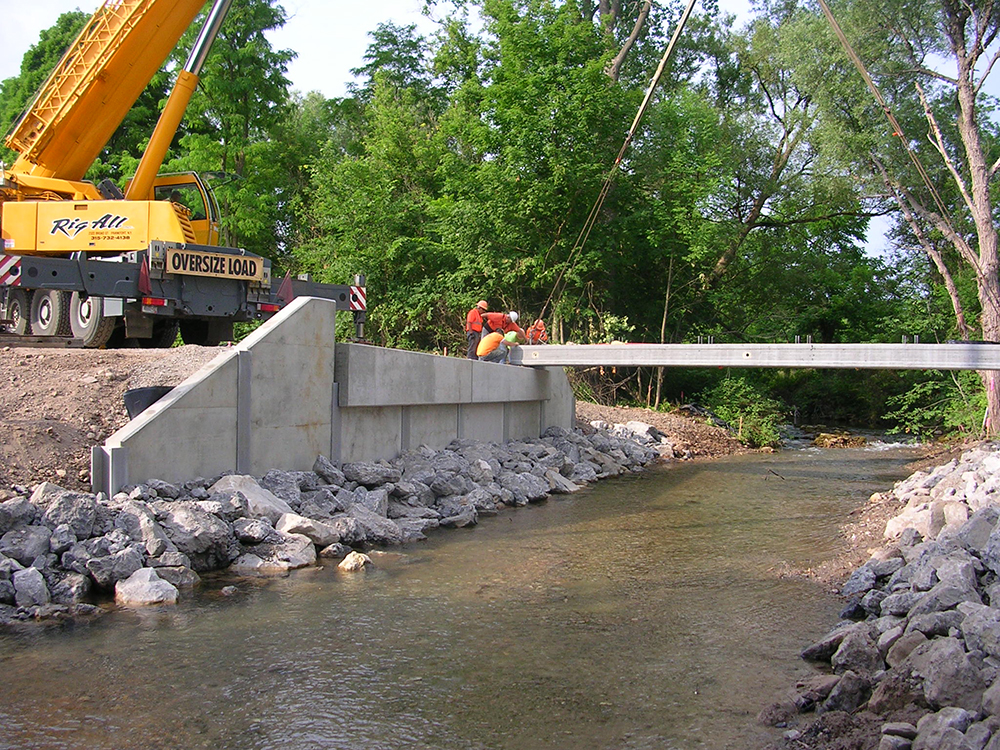 Prestressed beams are set on the south abutment above the precast abutment system.

The best innovations are born of need.

That’s when David Husted of Husted Concrete Products approached his project manager, Tamer Osman, P.E., with a question: Can we come up with an idea to help the town be able to build the bridge in a cost-effective manner using its own crew?

Osman accepted the challenge and designed the precast abutment system (PAS), an innovative, fast-track bridge replacement solution pieced together as simply as LEGO blocks. Husted Concrete manufactured the system, and the rest was left to the town.

“The town built it with an excavator,” said Osman, the director of specialty precast services with Delta. “They did it so quickly over a weekend, and that’s how it started. It was the need of a town that didn’t have the money to get big equipment.” The PAS is intended to provide a simple, economic and fast solutions for short-span or low-volume bridge replacements. Its main components include precast concrete caps, precast concrete laggings, precast concrete footings and H-piles bolted to the footings. The design must take into account earth lateral pressure, loads from the superstructure and soil parameters.

The precast lagging, or panels, are designed to retain the soil and resist lateral forces from the soil. The PAS panels measure just 8 inches thick.

The H-piles carry the precast cap beam, which in turn carries the superstructure. Osman designed the system to use widely available 12-by-53 H-piles, the same used for bridges.

“Most contractors have tons of this section,” Osman said. “It’s a good section that can take the loads.”

The precast footings distribute the load to the bearing stratum. The size of the footing is flexible depending on the bridge environment.

“The footing changes from one side to another,” Osman said. “If there was a rock on that side, then the footings are going be small. If the soil is not good, the footing is going to get bigger.”

Mechanical couplers connect the units together.

Prior to construction, local crews prep the area, clearing the hole the bridge will be placed in and laying down a bed of gravel. The footer segments are set, then the H-piles are installed, bolted to each footer.

“The spacing between them I can play with, between 6 and 8 feet,” Osman said. “That’s a lot of savings.”

Next, abutment panels are lowered into place in between the piles. Once the panels are all in place and the abutments have been backfilled, the caps are positioned and prestressed beams are set on the caps. The bridge can then be paved and finished.

Osman did a cost-benefit analysis between the PAS system and other similar bridge solutions. He found PAS comes out as the most cost effective option, especially if the counties do some of the work themselves. And though steel may offer a cheaper solution in the short term, it doesn’t endure like precast.

“You’re going to save more money than any other system that I’m aware of,” Osman said.”(Steel) doesn’t work in all soils, and steel doesn’t have the longevity of (precast) concrete.” The adjacent wing wall abutment panels are in place for the South Creek Road Bridge.

Cost was the most influential factor in designing the system, but it was a multi-level challenge. Conventional abutments use a massive amount of concrete. Those projects require large forms for cast-in-place concrete as well as 28 days for curing of site-cast concrete. Even conventional precast systems need large trucks to transport the pieces, skilled labor for installation and cranes to lift them into place.

PAS panels use less concrete and are far lighter. Medium-sized excavators and smaller delivery trucks can be used on the project. And existing county or municipal crews can handle placement. All for about $30,000 for a typical two-lane, 30-foot span bridge replacement.

“The system saves on time, saves on money in the ease of constructability that you need just an excavator to put those units together,” Osman said.

Upon the success of the Steuben project, Osman realized the opportunity the system provides for municipalities and counties in similar situations. He began making presentations across the region, sharing with officials the many attributes of the PAS, emphasizing its simple and flexible design, fast construction and affordable price tag.

The system has been used in about a half dozen projects since then. It’s been an easy conversation with communities looking to save money on major projects.

The system is used in smaller bridge projects over creeks and brooks, meaning most residents drive over the bridge without a second thought to the underside. But, if counties or municipalities desire, at a cost the precast supplier can use form liners to produce a custom look for the abutment panels.

One issue the system can not get around is federal funding. In New York, a county that receives federal funding must use an approved type of bridge from the state’s bridge manual. Since the PAS does not appear in the manual, it’s not available to counties or towns utilizing federal funds.

“That’s the challenge when you try to do something innovative or outside the norm,” Osman said.

The system also has seen several iterations. Osman utilizes animation and 3-D printed models to develop these improvements. He made the columns bolted instead of embedded. A crew member looks over a finished half of the north abutment of the South Creek Road over Clockville Creek bridge replacement in Lincoln, N.Y.

Osman also focused on improving transportation of the system. Originally, the footings and columns were standing up, taking up space on the trailers. He changed the design to take the columns out with a connection, allowing the footers to be stacked.

“You make one trip instead of four,” Osman said. “You keep looking for ways to make it more cost effective.”

A Solution for Lincoln

Officials in Madison County, N.Y., attended one of Osman’s PAS presentations and loved the idea. They said they had the perfect project for it – a single span bridge in Lincoln, N.Y., in need of replacement.

During the design phase of the South Creek Road over Clockville Creek bridge replacement, Osman told officials they could save additional money by casting the pieces themselves.

“They preferred a precaster do it, and they didn’t want to do it themselves,” Osman said. “They hired a contractor, and it went really quick.”

These precast elements allowed crews to immediately backfill the abutments, effectively eliminating the curing time required for cast-in-place construction. This shortened the duration of construction and limited the impact on the public use of the roadway.

The recognition was nice, Osman said, but he found validation elsewhere.

“I’m not gonna lie and say it didn’t feel good and I did not want the recognition,” Osman said. “But it felt good when I was one site, and I saw them getting those big pieces that I drew on paper and putting them out. I felt good about that.”