The stretch of road creating the headache, a portion of Interstate 20 running through downtown Shreveport-Bossier, needed a solution not currently in the department’s tool chest. Luckily, the district administrator is a big proponent of trying new technologies and methods to make the department more efficient and better stretch taxpayers’ dollars.

Around the same time, Phillip Sturdivant, a project engineer with LaDOTD, traveled to Baton Rouge to meet with a Federal Highway Administration precast concrete panel implementation team conducting a two-day technical workshop. LaDOTD had already started looking into possible applications for jointed precast concrete pavement, and a trial run was the next step. While the I-20 project was too large for a trial run, LaDOTD identified two smaller projects for consideration and the FHWA awarded LaDOTD a monetary incentive through its Strategic Highway Research Program, along with subject matter expertise. 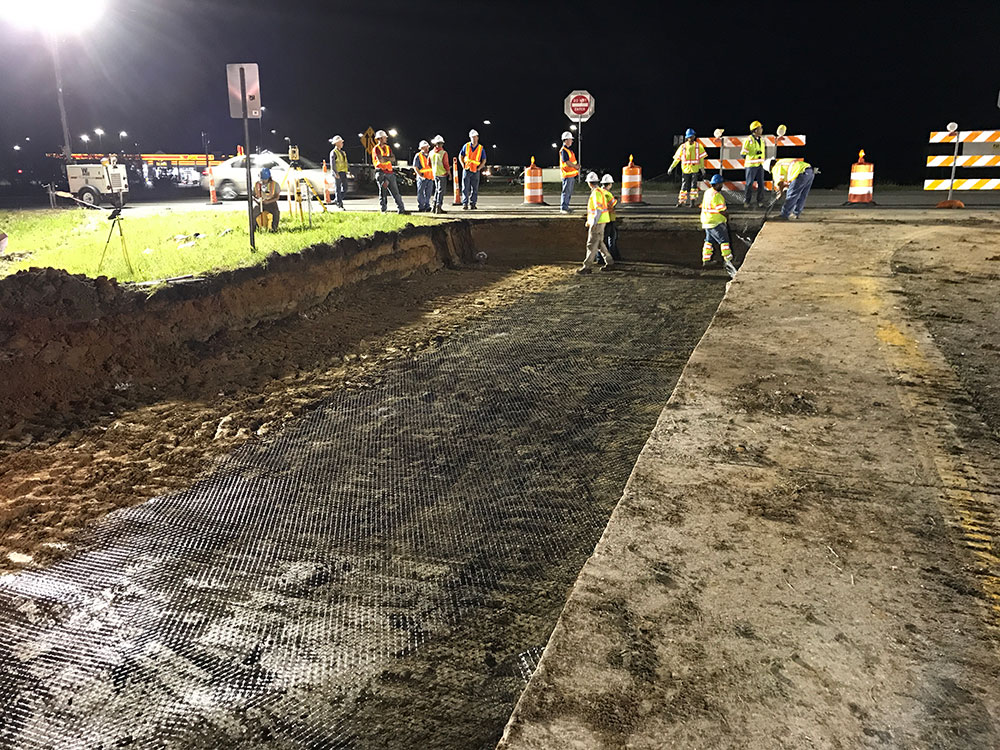 “The FHWA wanted to know if we had any potential project locations, so we discussed the ramp we ended up replacing and a roadway in our district that is heavily traveled, both of which were concrete and in need of repair,” Sturdivant said. “For our pilot project, we decided we needed to keep the scope smaller so the ramp we ended up choosing is only about 1,500 feet and we could afford to close it if needed. It’s long enough that we could get reasonable work in but not too long for our first try.”

The next steps included a visit to Caltrans District 7 in Los Angeles to view an installation since Caltrans has installed more lane miles than any other state DOT. Following the visit, LaDOTD developed its own specifications from scratch followed by its own contract drawings.

“It was tremendously different than a cast-in-place system,” Sturdivant said. “We had many revisions, and the FHWA called in on multiple conference calls to help with subject matter expertise. Eventually we got our specification finalized and approved, and then designed the plans as design generic as we could so as not to limit out any supplier or vendor.”

The letting date for the project was February 2017, and W.L. Bass Construction of Monroe, La., chose the Super-Slab pavement system developed by The Fort Miller Co. Fort Miller, in turn, chose Forterra’s location in Grand Prairie, Texas, to manufacture the panels. Due to the curvature of the ramp as it connects with other roadways, each panel required a unique shape, and a geotechnical analysis of the soil revealed the need for 18 inches of class II stone to replace poor subgrade soils. Including the precast panels, bedding grout, base stone and ballast rock, the typical section thickness was more than 30 inches There was also a learning curve for the contractor as they went through trial runs prior to the start of the job. Thanks to collaboration and communication throughout, production went smoothly. Through tweaks to the process based on lessons learned, installation during the four weekend windows became more efficient, going from just 18 panels installed during two trial runs to 46, 62, 76 and then the remaining 58 on the final weekend. The final step was diamond grinding and grooving the surface.

“We finished the entire ramp from start to finish, and it rides very smoothly,” Sturdivant said. “We had a lot riding on this project. It’s a pilot project, and we wanted it to do well, so we could continue to use this product in the future.”

The section will certainly be put through a proverbial trial by fire with two nearby truck stops providing an abnormally large amount of truck traffic. So far, Sturdivant says the panels are holding up well and that the department will keep a close eye on them to inform future decisions. However, based on the experience they now see precast paving slabs as another tool at their disposal when applications, and unacceptable traffic queues, call for it. “We have a true need for this,” Sturdivant said. “We do intend to use PCPS technology on future projects, and we’re not limiting our precast use to roadways only; we’ve used it on bridges also to make a more efficient use of taxpayer money. That I-20 location will be a good location and we’ve also discussed another section along I-20.

“We’ll look to revise our spec to incorporate the lessons learned from this project but at the end of the day we are quite happy and looking forward to observing its performance.”