Lady Liberty prepares to lift her lamp to a new generation with a museum that rises from the earth like a beacon to immigrants and tourists alike.

It’s one of the most iconic structures in the world – Lady Liberty triumphantly raising her torch above New York Harbor. The statue was once the first sight of arriving immigrants in the era when Ellis Island processed the majority of would-be Americans, and today it hosts 4.3 million visitors who crowd onto Liberty Island each year to see her. But given limited access to the statue itself in the wake of new security measures post 9/11, 80% of visitors to Liberty Island never enter Lady Liberty’s pedestal.

The new Statue of Liberty Museum, scheduled to open in May 2019, is set to dramatically change the visitor experience on Liberty Island, even for those unable to enter the statue. The museum will house the Statue of Liberty’s original torch, which Lady Liberty held aloft until 1986, and will also offer a dramatic view of the statue from its gallery.

A new material for a new age

The nearly complete 26,000-square-foot museum features walls of precast concrete that provide structural support, insulation, and the building’s facade. It is also the first building project undertaken on the 14.7-acre Liberty Island since the Statue of Liberty-Ellis Island Foundation (SOLEIF) assumed responsibility for preserving the statue in the 1980s. Once complete, after more than two years of construction, the $70 million structure aims to achieve LEED Gold certification for environmental sustainability with precast concrete occupying a central role in the achievement. 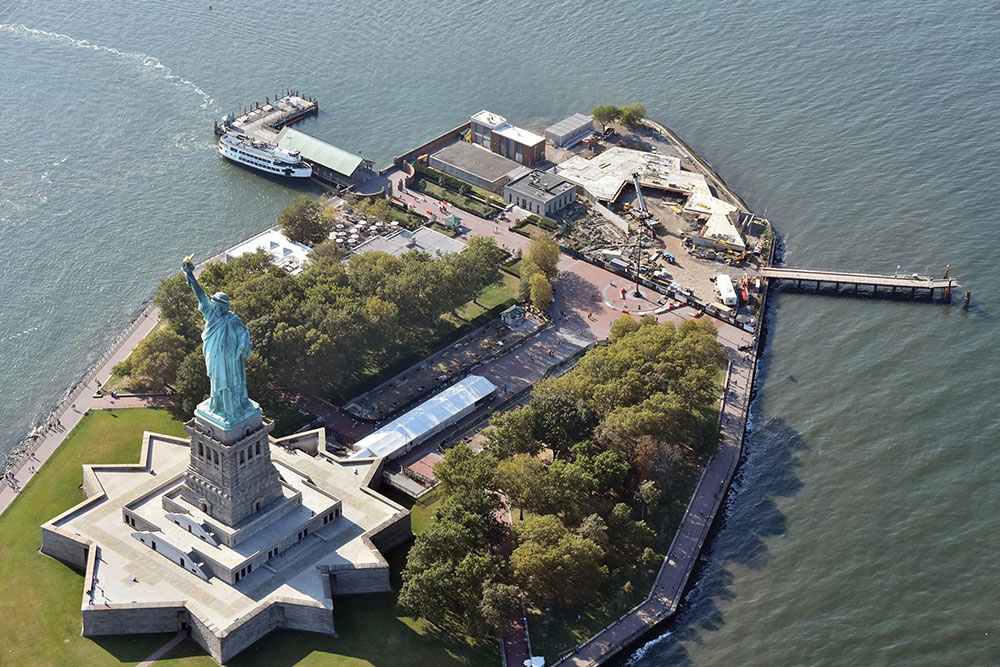 “The building was conceived to be a garden pavilion,” said Dan Piselli, AIA, project architect for the museum and director of sustainability and senior associate at FXCollaborative. “It’s trying to link the past and the future.”

The place where the new museum stands had always been empty, despite the original plan for a boat dock in that location. The new museum, which will offer a viewing platform for the statue as well as the lower Manhattan skyline, is designed to occupy the vacant space and merge with the natural world around it, hence its sloped green roof with angles and tiered areas for plantings as well as the building’s precast walls.

“The precast walls symbolize the ground being raised,” Piselli noted. “When designing the walls, we looked at the Palisades across the river in New Jersey as inspiration.”

The design team originally intended to construct the museum from cast-in-place concrete with granite cladding to complement the granite walls of the fort on which the Statue of Liberty stands.

The cost of granite proved to be prohibitive. Not to mention the logistical challenges of the project given its island location in New York Harbor.

“The cost of barging all those concrete trucks out there would have been enormous,” said Doug Phelps, president of Phelps Construction Group, which served as the project’s general contractor. He also wanted to minimize the amount of actual work that needed to be done on the island.

The use of precast not only reduced the number of workers and activity on-site but also saved the project some $700,000 in time and materials. FXCollaborative had previous experience with precast and felt it could ultimately address aesthetic goals similar to granite. That said, the design team did not look to emulate granite.

“We like to treat materials in an honest way on their own terms,” Piselli explained. “We did not try to match the color of the granite.”

Instead, the enormous precast panels became a reference to the heaviness of the ground. They also complement the brown-gray of the island’s seawall, the fort and statue, and the pre-existing concessions and administration buildings.

While the design-build team initially considered using only architectural precast for the museum cladding, Robert Pabst, vice president of sales for project precaster High Concrete Group, convinced them to fully leverage precast technology to provide not only the structural support, but also the thermal envelope with vapor and water barrier.

High Concrete’s carbon-cast high performance insulated wall panels comprise the museum’s structure and facade, which consists of an inner wythe, R-21 insulation and an exterior wythe. A carbon-fiber grid performs as a shear connector between the inner and outer wythes of concrete. High Concrete manufactured each composite panel in a controlled environment at their factory in Denver, Pa., and all were complete and ready for installation upon arrival on Liberty Island. Along with the panels, High Concrete produced 4-inch-deep fin profiles that cast shadows, creating a vertical striation that not only darkens the color of the building but also reinforces the design concept of it being lifted out of the ground. While one of the cost and efficiency benefits of using precast is typically the ability to take advantage of repetition in the molds, that was more challenging on the Statue of Liberty project given the varying sizes of the 143 panels involved.

“The building itself was not square,” Pabst noted. “It was a polygon. Plus, the sloping green roof design drove the tops of the panels to slope as well, creating a lot of unique pieces.”

To address this issue, the design-build team worked with the precaster to evaluate “form families” and find a solution to use the same form with some modifications to create the unique pieces.

After months of collaboration and mock-ups, they were able to find the solution, manufacturing all the unique panels using 10 form families, employing blockforms, bulkheads and form inserts to make individual adjustments as needed. “We definitely tried to leverage the forming technology to get a lot of value but at the same time have design flexibility,” Piselli explained.

Once cured, the panels were sandblasted to provide a textured finish and expose some of the stone in the aggregate. The dark and rough-hewn features of the panels, along with the angular roof lines and green roof, make the museum appear to rise out of the earth.

To comply with FEMA’s order on floodplain management issued in the wake of 2012’s Hurricane Sandy, the museum stands 10 feet above sea level, well above 500-year flood levels, and five feet higher than the floodwaters of Sandy. Meanwhile, the lowest wall panels feature vertical slots designed to allow storm surges to pass through and under the building to dramatically reduce potential impacts from another major hurricane. Precast concrete panels offered a relatively simple way to get an opening under the building to allow water to flow in and out while also providing structural support. The structure features a stacked panel design. The museum sits on top of a precast podium with all the mechanical infrastructure on top of that. Some of the upper panels connected to the podium are designed to withstand wave action as well, according to Phelps.

Rather than staging at the job site, High Concrete transported the panels on special rack frame trailers from Pennsylvania to a staging area in Jersey City, N.J. – generally only one panel per trailer given their massive size. Four trailers at a time were moved onto a barge and taken to a temporary dock at Liberty Island, where a single truck transported each trailer to the construction site for installation. Phelps rented two barges with tugboats to accommodate the transport across New York Harbor.

Once on the island, a jockey truck took each trailer off the barge to the job site, where a crane lifted and put the precast pieces in place, each connected to the other with steel plates, steel dowels and non-shrink grout. At the height of construction, the job involved two barge trips per day, transporting 10 to 12 panels – an eight-week process.

“The kind of precast system we used – the insulated sandwich panel – is very good in terms of helping reduce energy use in the building,” said Piselli.

“With a sandwich panel, there’s precast outside and then insulation, and then more precast inside,” Piselli pointed out. “In addition to insulation, the internal precast buffers against temperature swings and reduces the buildings HVAC load.”

Piselli’s team learned a lot from the project, since it was the first time FXCollaborative used precast as a structural material.

“If you want to design with structural precast panels, you have to understand what goes inside the panel to understand the limitations,” he noted. And although he found precast helpful in conducting a lot of off-site construction, he appreciates that the size and weight of the panels created complexity due to the island’s logistical challenges.

Intense collaboration on the part of the entire design-build team, including High Concrete, was critical to the Statue of Liberty Museum’s project success. High Concrete Group worked with the architect for more than a year to address all the benefits and challenges of working with precast.

“You really need to make a concerted, collaborative effort to understand all the performance criteria before you offer the product to the market,” Pabst said of the collaboration. “That takes a lot of effort.”

But when he looks at the nearly finished museum today, he said, it sends chills down his spine to know he worked on an iconic project that’s going to be there forever.