By moving the conveyor system underground, crops can be moved quickly without impacting surface traffic, creating a more efficient operation.

One of the toughest jobs for farmers is getting their crops to market. To help farmers in northeastern Ohio deal with this issue, Lindsay Precast of Canal Fulton, Ohio, was called in to assist with an agricultural project that greatly improved the ease and efficiency of sorting and distributing grain.

Deerfield Ag Services, which owns a grain elevator in Massillon Energy & Technology Park in Massillon, Ohio, wanted to make infrastructure improvements to eliminate extra trucking moves in order to streamline the overall operation. These improvements would not only benefit customers, but also give Deerfield Ag Services a competitive advantage in the Ohio marketplace and the global market for grain sales.

The project – a partnership between METP, Republic Short Line Railroad and Deerfield Ag Services – is an underground conveyor system. By moving this function underground, surface truck and rail traffic on the METP site will flow without delays from crop-processing functions such as farm trucks crossing the railroad tracks. The end result is a safer and more efficient operation. METP and Deerfield Ag Services worked with Lindsay Precast to create the precast pieces while Tiger Sand & Gravel, located on the METP site, provided the necessary base and fill.

The project enables trucks hauling soybeans and corn from across northeastern Ohio to dump their loads into a pit at Deerfield Ag’s terminal. A conveyor then moves the grain through a tunnel built with precast concrete box culverts. The tunnel runs under a main road and two railroad tracks on the METP site, where it connects with grain bins. Deerfield Ag can then load out rail cars and shipping containers full of grain that are exported to businesses out of state, as well as throughout the world. Photo courtesy of Lindsay Precast
Precast concrete is helping farmers get their crops to market faster.

Lindsay Precast sets 150 to 200 box culvert projects every year, but this project was unique with the rail loading, pit vaults and a very short window for installation. The precast box culvert tunnel protecting the conveyor system required precision due to an opening in the top of one piece which had to accommodate discharge from the rail car directly to the conveyor below.

“Not only did the opening in the precast have to be spot-on, but the setting of the units also had very little room for error to land between the tracks,” said Dean Wolosiansky, general manager for Lindsay Precast.

“You could easily drive a full-size pickup truck through the tunnel section, that’s how large these pieces are,” he said. “The size and the overall strength of the tunnel is impressive, especially considering tractor trailers and trains are being driven over the top.”

The 150-foot (10-foot-by-12-foot sections) box culvert run ties into two 16-foot-by-12-foot hopper vaults. This enables the two loading bins to funnel crops onto the conveyor, which then transports the produce under the tracks to a sorting and storage facility. The sorting facility’s walls are tied into the box culvert sections, making a smooth transition from basement to tunnel.

“Unlike many culverts, the box sections were taller than they were wide to accommodate the slope of the conveyor over the entire run,” said Wolosiansky. “With a top slab of 22 feet and bottom slab of 20 inches, the pieces were not light, to say the least.”

Some pieces weighed as much as 75,000 pounds. All 36 pieces, including the tunnel and vaults, were delivered and set in two days. Precast concrete was selected for the project as a cost-effective solution that minimized negative impacts to ongoing operations and downtime on the site.

“Our precast was pre-manufactured and cured ahead of time so the rail line was only down for a couple of days,” Wolosiansky added. “The combination of equipment, facilities and resources as seen at METP is rare to come by. This is what made the short window possible.”

The project is already having a positive impact on the agricultural market in Ohio due to the efficiencies the tunnel system created for Deerfield Ag and METP. Produce moves from field to rail car within minutes. 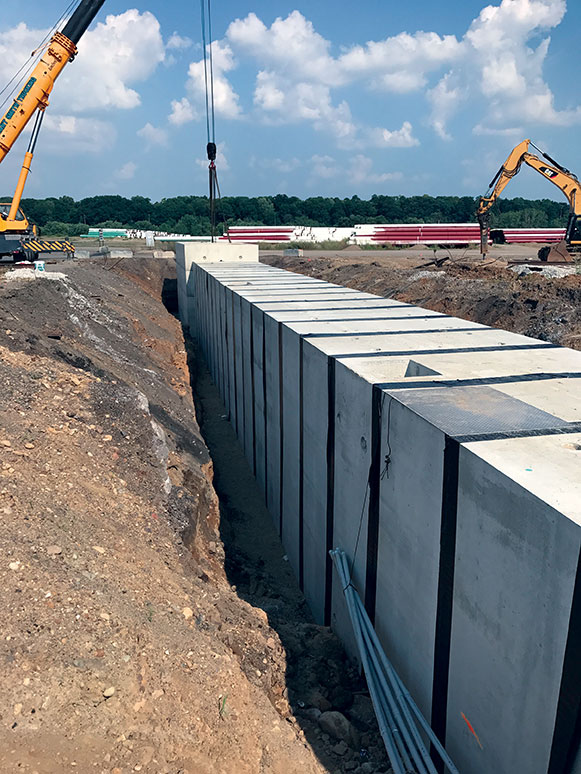 Photo courtesy of Lindsay Precast
By creating an underground precast concrete tunnel, farmers can get their crops to market quicker without slowing down rail or road traffic.

“To us, the biggest surprise was how quickly everyone responded to the idea,” noted Kloots. “It is quite exciting to see how one project can bring together many industries: agriculture, rail, industrial, aggregates, concrete and engineering.”

Within a year of the initial concept, an agreement was in place with Deerfield Ag Services and plans were drawn up and reviewed.

“Everyone was hands-on and willing to help out where they could to make the project happen in the timeframe desired,” said Wolosiansky. “We love challenges here at Lindsay – some are large scale and some are fine details, and this project required a little of both. Like any project, there are always surprises, but it is the people and the companies that step up and make a difference to make sure the project is a success.”

“Lindsay Precast had all the pieces made and delivered within a couple of weeks,” added Kloots. “Their eagerness to be part of the project, along with their quick action, really got everyone excited about the end results to come.”

As METP looks toward providing intermodal rail traffic and growing the number of tracks, the tunnel and conveyor system allows the park to expand safely by reducing congestion and keeping farm trucks away from the area.