It’s one thing if you’re talking about a great magic trick, but quite another if you’re talking about your beachfront home. In recent years, the winds and waves of Hurricane Katrina (2005), Hurricane Ike (2008) and Superstorm Sandy (2012) have reclaimed miles of our beaches and shorelines and demolished everything in their path. But anything that produces significant wave action, including high-speed boats and poorly planned construction projects, takes its toll. Besides loss of property, large wave activity disturbs the natural reef habitat of marine life, reducing their numbers and disrupting the balance of the ecosystem. Increasingly, homeowners, municipalities and government officials are actively searching for ways to protect their shorelines. And that’s good news for precasters.

One big advantage precast enjoys is that it’s environmentally friendly, unlike the surplus armored vehicles, old steel barges, trawlers and tugboats that are sometimes used to create artificial reefs.

“The problem with those materials is that they pollute, and that’s not good for the marine life,” said Tom Montalbine, president of Roman Stone Construction Co., based in Bay Shore, New York. “The equipment has to be cleaned to make sure it doesn’t contain any toxic materials, and cleaning costs aren’t cheap.”

Precast concrete artificial barriers are specifically designed to provide protection for marine life, attract living organisms and diffuse waves. Additionally, when a source of sand is available, they can actually help rebuild shorelines.

Plum Point in Calvert County, Maryland, provides one example. After losing 150 ft of shoreline during a four-day storm, Beach Prisms were installed. Within three months, Plum Point had not only regained the 150 ft, but an additional 100 ft as well. “Other solutions like riprap or Armour Stone only preserve the status quo,” said Jay McKenna, regional sales manager for Smith-Midland Corp. in Midland, Virginia, which manufactures and installs Beach Prisms.

Precast concrete is much easier to install and less expensive than riprap or Armour Stone. It’s also more cost-effective than pumping in replacement sand. When Texas lost 100 million cubic yards of sand to Hurricane Ike, the replacement cost at the time was $2.5 billion in sand alone (1). In addition, precast concrete reef barriers are portable and strong, manufactured at a minimum of 5,000 psi and with a life expectancy of 100-plus years.

Living Shoreline Solutions Inc., based in Dade City, Florida, is a licensed dealer of Artificial Reefs & Coastal Restoration Inc.’s patented Wave Attenuation Device. The pyramid-shaped WAD is designed to be roughly 12-18 in. taller than the mean high tide at the deployment site, with triangular openings along each side that dissipate wave action and trap any available sand deposits. Living Shoreline Solutions installed 800 ft of WADs, weighing 8,100 lbs each, on the western end of Bird Island in Tampa Bay. The project was so successful that the Audubon Society requested the company wrap the entire island in WADs.

“We don’t guarantee sand deposits,” said Thomas Brown, CEO of Living Shoreline Solutions. “What we guarantee is that we’re going to give customers 90-95% wave attenuation.” WADs aren’t guaranteed to hold up to Category 5 hurricanes, either, but Brown noted he’s never seen a WAD move, even in those conditions.

Each project begins with research specific to the locale, such as the 20-, 50- and 100-year storm events, water depth and bottom conditions. Steel molds are then designed and manufactured at the Dade City location. Corrugated steel on the outside produces increased wave attenuation. Instead of steel rebar, the concrete is reinforced with fiber mesh.

New Iberia, Louisiana’s Shark Island was one of the company’s more challenging projects. Coastal wetlands and spoil islands, which are created by dredging along a waterway, are Louisiana’s last line of defense when major storms roll in. Over the past 25 years, the state’s coastline has been losing wetlands at the rate of more than 16 miles per year – the equivalent of losing a football field of coastline every hour (2). 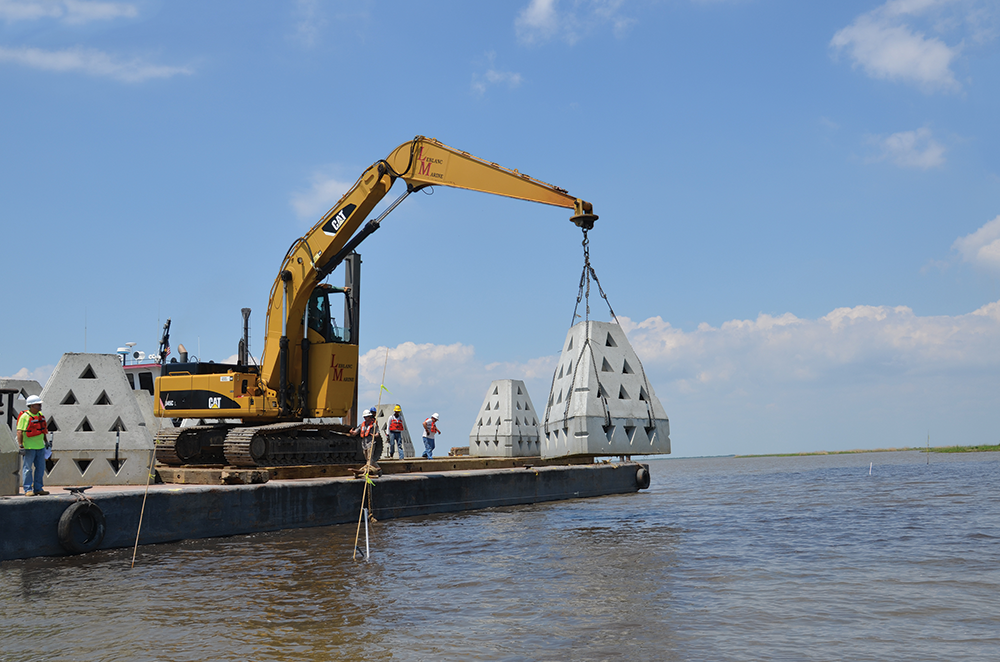 Shark Island’s muddy, unstable bottom conditions necessitated the creation of a special mold – a two-piece unit with a 2.5-ft base that could distribute the weight of a WAD so it would sink no more than 3 ft. The 156 WADs were 9.5 ft tall and weighed 13,500 lbs each.

Another challenge was determining how many WADs could safely be placed on the barge at one time. With a water level depth of less than 4 ft, getting grounded was a real possibility. But deployment proved to be a breeze.
“We found we could take a 13,500-lb unit off the barge, put it in the water, set it and go back for another one in close to 3 1/2 minutes,” Brown said.

According to Brown, the biggest competition for WADs comes from riprap, but the cost per linear foot of WADs is, in general, half that of riprap or boulders.

A few years ago, the DEC approached Roman Stone Construction Co. about supplying Reef Balls for Fisherman’s Reef, located on the Great South Bay off Long Island. While Reef Balls help stop erosion by diffusing waves, the focus of this project was to create a favorable habitat for fish and marine life.

Designed by the Reef Ball Development Group, Reef Balls come in 10 sizes and 20 styles to accommodate different functions and conditions and are designed with most of the weight at the bottom for optimum stability (4). The manufacturing process involves pouring pH-neutral precast into fiberglass molds with a Polyform buoy in the center, which can later be used as a flotation device. Sand-filled paper bags, placed on the bottom of the mold, make that surface uneven and suitable for lobster holes.

The customized holes and voids, which provide shelter for marine life, are created by using inflated balls that are deflated after the curing process is complete.

“The concrete picks up this texture and it makes a good surface to promote marine life growth,” Montalbine said.

Smaller Reef Balls can be towed to the site and the flotation device deflated, while larger ones are often deployed by barge and crane. The Fisherman’s Reef project called for 100 pallet-sized (4 ft wide by 2.9 ft tall) Reef Balls, each weighing approximately 1,500 lbs.

A strong tidal current and a tide that was slack for a period of only 30 minutes at a time made deployment at Fisherman’s Reef very challenging. Fortunately, the local Army National Guard volunteered to drop the Reef Balls in Fisherman’s Reef as a training exercise. It took three helicopters only one day to deploy all 100.

A Beach Prism consists of a series of triangles constructed from sulfate-resistant concrete reinforced with rebar. Prisms are designed with a parabolic curve that dissipates wave energy and deposits any sand held in suspension on the shore. A typical unit is 4 ft high, 4 ft wide and 10 ft long and weighs 9,000-plus lbs, but units can be larger.

Easi-Set Worldwide, based in Midland, Virginia, licenses the latest generation of Beach Prisms to established precasters. Easi-Set helps manufacturers obtain permits – prisms are permitted on a case-by-case basis – by providing engineering expertise as well as studies and examples of other permits.

Moffette Tharpe, managing director for Easi-Set Worldwide, estimates there have been about 30 installations since 2009, mostly in the Chesapeake Bay area. “Progress has been rather slow because of the time it takes to get installations approved,” Tharpe said, “not because of their performance.”

Smith-Midland’s Ocean Gate, New Jersey, project was several years in the making. Borough officials and the New Jersey Department of Environmental Protection had discussed using Beach Prisms to stop erosion, but it hadn’t been approved when Superstorm Sandy hit. Sandy destroyed Ocean Gate’s beautiful boardwalk, one of the borough’s top attractions. The cost to rebuild the boardwalk was approximately $8 million (5).

“Now, they started getting serious about getting protection,” McKenna said. The NJDEP agreed to an experimental installation of 35 prisms for the first phase that were subject to evaluation before approval would be given for the remaining two phases. Because fish-spawning season begins Jan. 1, the job had to be completed before Dec. 31, 2013.

The prisms were precast in the main plant and trucked to Ocean Gate. All went well until it got mired in the sand. Then it was back to the barge and crane. Beach Prisms are quick and easy to install, and the first phase of the project was completed Dec. 18.

The Beach Prisms received the “Good Housekeeping Seal of Approval” from the NJDEP in October, and Smith-Midland immediately received a second order for five additional prisms.

“It’s not considered experimental anymore,” McKenna said. “We expect to do a lot of business in New Jersey next year.”

Shari Held is an Indianapolis, Indiana-based freelance writer who has covered the construction industry for more than 10 years.