How will the new AASHTO loading specifications affect you? 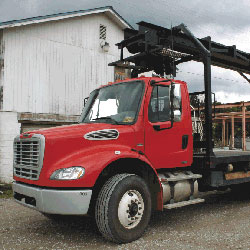 Precasters who manufacture underground products such as box culverts and pump chambers have for many years designed their products for AASHTO HS20-44 or Alternate Military Loading (Interstate Loading), whichever produces the worst condition on the structure. They are beginning to see specifications for projects that require an AASHTO HL93 truck load. How will the new loading specifications affect future designs for underground structures that are currently based on the requirements of the old loading specifications?

The American Association of State Highway and Transportation Officials (AASHTO) was created in 1914 to provide guidelines for the design of structures within highway boundaries. State Department officials volunteer their services to generate necessary specifications. The document titled “Standard Specifications for Highway Bridges” has for many years defined the load and design requirements for underground precast (or cast-in-place) concrete structures. The recommendations from this document are included in ASTM specifications written for underground precast concrete structures such as C478, C890, C913, C1443 and C1557.

The most recent edition of the “Standard Specifications for Highway Bridges” is the 17th edition, published in 2002. The design methods in those 17 editions included the Allowable Stress Design (ASD) and Ultimate Load Factor Design (LFD).

The truck loads first used had the designation of H20 (see Figure 1), which covered a two-axle truck weighing 20 tons. The front axle carried 8,000 pounds and the rear axle, 14 feet away, carried 32,000 pounds. The 1944 edition included the HS20 truck load and started a policy of affixing the year to loadings making HS20-44 the official designation. The additional ‘S’ made an allowance for heavier tractor-trailers that were available at the time. Figure 2 describes the load and load spacing for HS20-44.

As the Interstate Highway System evolved in the 1950s, one of its goals was to transport military vehicles. The “Alternative Military Load” (also referred to as “Interstate Load”) was created to cover axle loads from heavy military equipment. This new load, shown in Figure 3, consists of two axles 4 feet apart with each axle carrying a load of 24,000 pounds. 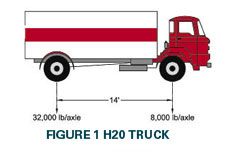 A system of lane loads was created to provide a simpler method of calculating moments and shears rather than using concentrated wheel loads shown in Figures 1 and 2. The lane loads are used in designs of bridge decks that consist of several lanes on multiple spans. They are not used for design of structures below grade, because the concrete boxes normally consist of single spans that are relatively short when compared with bridge spans.

There was some concern during the end of the 20th century that the HS20 truck load did not adequately reflect actual conditions. As a result, some engineers have required an “HS25” truck load for underground precast structures. This rating has been interpreted as being 25 percent higher than the HS20 truck load. Thus, the HS20 axle load of 32,000 pounds becomes an HS25 axle load of 40,000 pounds. The increased load can in some cases create the need for additional reinforcing steel and sometimes a thicker top slab on underground structures installed in areas exposed to heavy truck loads. In recent years, AASHTO has created the document titled “LRFD Bridge Design Specifications.” The current 3rd edition was published in 2004 with a 2005 interim. The purpose of the LRFD (Load and Resistance Factor Design) document is not to make all existing bridges obsolete, but to provide a design of new bridges that includes benefits from statistics, research and new materials. Load and resistance coefficients are slightly different, but the results are similar. The Federal Highway Administration has endorsed the new LRFD method and encouraged its adoption for new bridge designs after 2007. As a result, precast concrete manufacturers are seeing contract documents that require AASHTO HL93 truck loads.

The HL93 designation consists of a “design truck plus design lane load” or “design tandem plus design lane load,” whichever produces the worst case. A “design truck” is identical to the HS20 load configurations shown in Figure 2. The “design tandem” is the same as shown in Figure 3 except that the axle load is 25,000 pounds rather than 24,000 pounds. The term “lane load” is new and applies to design of above grade bridge decks. It does not apply to below ground structures. This is confirmed in ASTM C1577, which states that the tables were created using the AASHTO HL 93 live load without the lane load as permitted by AASHTO.

Many precast manufacturers pose the question, “How does the new HL93 load affect design of structures that were designed with wheel loads specified in the old document ‘Standard Specifications for Highway Bridges’?” The term wheel load is used because spans on most underground structures are so small that only one wheel can be on top of the structure at any given time. A wheel load is one-half of the axle load.

Wheel loads affect the top slab design more than wall and bottom slab. This is especially true where the slab is less than 2 feet below grade. The effect of the wheel load on the slab decreases as depth of cover increases. Wall design in the majority of cases will not be affected by the small increase in loads required by the “LRFD Bridge Design Specification.” The same is true of the bottom slab design.

It can be concluded that the new loads may affect existing designs, but the difference between old and new does not mean that all designs need to be updated. The small increases will not affect designs that have excess capacity. Those designs that minimized reinforcing steel and slab thickness to create a structure that was just good enough may need to be reviewed. These conclusions are based on a comparison of wheel loads and do not include the many other factors used in design. Items such as impact, depth of cover, load and resistance coefficients all play a part in the final design. A true comparison of designs must be made based on criteria used in the precaster’s previous calculations.